Hobsbawm, a lifelong Marxist whose work influenced generations of historians and politicians, died in the early hours of Monday morning at the Royal Free Hospital in London after a long illness, his daughter Julia said. He was 95.

Hobsbawm’s four-volume history of the 19th and 20th centuries, spanning European history from the French revolution to the fall of the USSR, is acknowledged as among the defining works on the period.

Fellow historian Niall Ferguson called the quartet, from The Age of Revolution to 1994’s The Age of Extremes, “the best starting point I know for anyone who wishes to begin studying modern history”.

Hobsbawm was dubbed “Neil Kinnock’s guru” in the early 1990s, after criticising the Labour party for failing to keep step with social changes, and was regarded as influential in the birth of New Labour, though he later expressed disappointment with the government of Tony Blair.

Ed Miliband, the Labour leader, described Hobsbawm as “an extraordinary historian, a man passionate about his politics and a great friend of my family”.

He said: “His historical works brought hundreds of years of British history to hundreds of thousands of people. He brought history out of the ivory tower and into people’s lives.

“But he was not simply an academic, he cared deeply about the political direction of the country.

“He was also a lovely man, with whom I had some of the most stimulating and challenging conversations about politics and the world. My thoughts are with his wife, Marlene, his children and all his family.”

Hobsbawm’s lifelong commitment to Marxist principles made him a controversial figure, however, in particular his membership of the British Communist party that continued even after the Soviet invasion of Hungary in 1956.

He said many years later he had “never tried to diminish the appalling things that happened in Russia”, but had believed in the early days of the communist project that “a new world was being born amid blood and tears and horror: revolution, civil war, famine. Thanks to the breakdown of the west, we had the illusion that even this brutal, experimental, system was going to work better than the west. It was that or nothing.”

Hobsbawm was born into a Jewish family in Alexandria, Egypt, in 1917, and grew up in Vienna and Berlin, moving to London with his family in 1933, the year that Hitler came to power in Germany. He studied at Marylebone grammar school and King’s College, Cambridge, and became a lecturer at Birkbeck University in 1947, the beginning of a lifelong association that culminated in his becoming the university’s president.

He became a fellow of the British Academy in 1978 and was awarded the companion of honour in 1998.

He is survived by his wife, Marlene, his daughter, Julia, and sons Andy and Joss, and by seven grandchildren and one great-grandchild. 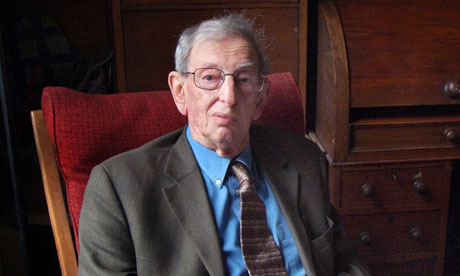 2012-10-02
Previous Post: The Jane Fonda-Kit House: arquitectural prototypes and the promised bodies of sustainability
Next Post: Experiments in (and out of) the studio: Art and Design Methods for Science and Technology Studies