By: Material World
In: Digital World, Notes from the Field
Tagged: beyond text, Digital Anthropology, digital learning, London
With: 0 Comments

Jennifer Fu and Gemma Tortella-Procter, MSc. Digital Anthropology at UCL
“What exactly constitutes ‘digital anthropology’?” While the practical projects we worked on may not provide a comprehensive answer to this question (perhaps a ‘comprehensive’ answer doesn’t exist), it provides an idea of the things we care about as digital anthropologists and the direction we hope to push a traditionally text-based discipline in.
As a part of the MSc Digital Anthropology core course, all of the students are given the task and opportunity to “produce a publicly accessible website which will present the results of a mini research project about an instance of digital technology use.” The challenge for the 2017-2018 class was to find a London marketplace and investigate it in the context of its digital mediation. The prompt was most likely intentionally vague. While that was challenging and frustrating for many of us at first, the open-ended nature of the prompt resulted in 18 creative projects with both “marketplace” and “digital mediation” defined and explored in various ways. For instance, some people chose traditional London markets like Borough Market and Covent Garden while others chose broader markets in London like the housing property market and alternative market. Some understood ‘digital mediation’ as the ways digital technologies (e.g. mobile payment and smart till) were utilized and embedded in their chosen markets while others saw digital technologies as an intrinsic part of the make-up of the marketplace (e.g. personal dom website and Airbnb platform). To give our readers an idea of the projects that were conducted, Gemma and I will showcase our projects—Airbnb photography experience and the professional dominatrix market in London—in the following sections and end this blog cost with some short concluding thoughts.
Experiencing London with Airbnb: Walking and Photography Tours (Jennifer Fu)
In early October 2017, a month after I arrived in London, I was starting to get frustrated that I wasn’t seeing much of London besides the UCL anthropology department and its countless libraries. Having used Airbnb for 3 years at this point and the relatively recently launched “experience” when I visited some friends in Tokyo, I thought to myself, why not explore some of the experiences in London and take my camera out for a day? As a platform that touts itself for offering ‘authentic and local’ experiences, I decided to conduct my mini-ethnographic project on Airbnb. My project had 3 broad focuses: (1) the market, (2) experiencing and constructing London, and (3) photography.
For the market focus of my project, I explored and presented the digital infrastructure of the market (i.e., the design that guides the ‘shopping’ experience on Airbnb) using Loom, a tool that allows users to video record their screens.
I then used different visualizations to demonstrate how the concept of ‘local expertise’ featured in each experience and how the ‘personal’ aspect of the trips contributed to the overall ‘commodity’ nature of these paid trips:

For the second part of my project, which is the most ethnographic portion of my website, I built three different maps using both Google map and thinglink to demonstrate the structures of the trips: 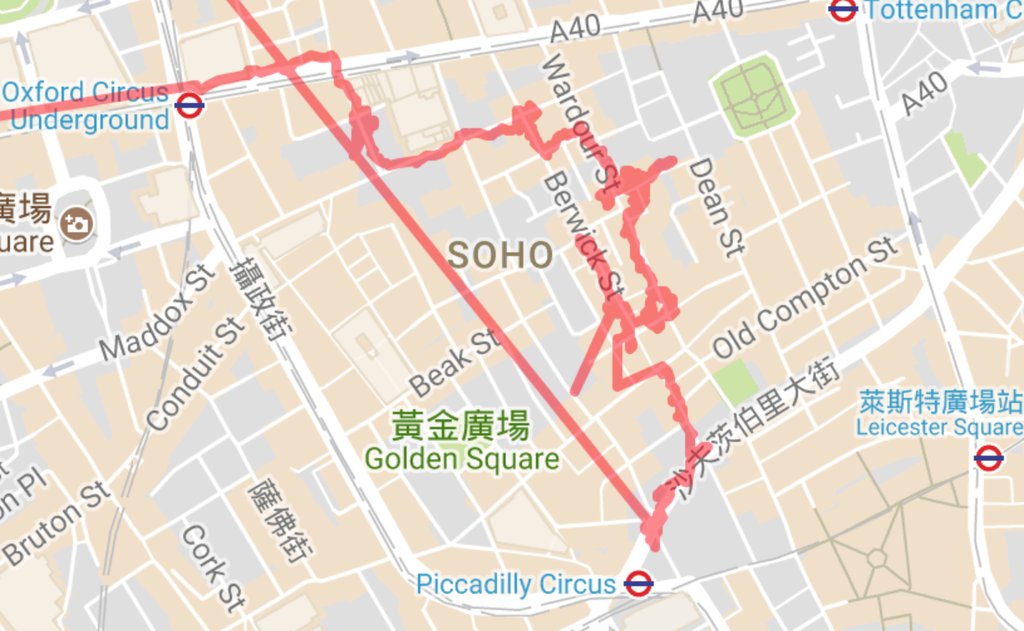 While the ethnographic accounts were more text-heavy than I wanted them to be, I tried to incorporate other storytelling methods to ‘recreate’ the sensorial dimension of these experiences. In addition to the maps, I included snippets of audio recordings from the trips in attempts to make the ethnographic material more immersive and experiential.
The last part of my project focused on the diverse roles that photography played in these trips. In this section of my website, I highlighted four key ways photography featured itself. Here, I will highlight my third point and show how digital display methods allowed me to emulate my hosts’ use of photography and challenge some of anthropology’s classical ways of treating photography. I chose to format the homepage of my website with highly edited and stylized photos from the trips I went on:

When it comes to conducting fieldwork, many anthropologists treat photography as pure documentation. To demonstrate such biases, in an informal meeting about using media to conduct fieldwork with some Ph.D. anthropology students, two Ph.D. students asked me the following questions: “It looks like these photos have been severely edited in terms of colors, lighting, and even the framing. Doesn’t that distort the documentation a little bit?” Another asked, “These are obviously selected and curated. What did you do with the rest of the photos you took that day?” Both of these questions presumed that photographs should serve as untampered-with documentation of anthropologists’ fieldwork and those “raw data” should be presented and properly archived.
This bias towards seeing photography as primarily a means to “catch and preserve, by film” is nothing new and has been demonstrated by anthropologists like Mead. With that said, such narrowly defined understanding of photography not only contributes to the false idea that “raw” or “objective” data exist but also makes it difficult to take what my hosts do seriously:

Inspired by Strathern’s Partial Connections (where she structured her book like a fractal) and Riles’ The Network Inside Out (where she focuses on the forms instead of the content that her informants worked with), I attempted to produce photographs that look like the ones my hosts might take. I went through the process of framing, editing, and finally presenting, in ways that echo my hosts. As Riles argued, the “ultimate result does more than render the ethnographer as a character in the story . . . The effect is to recreate aesthetically that possibility of anthropology after poststructuralist critiques: in turning our model inside out” (2001:19).
Fully Fashioned Study (Gemma Tortella-Procter)
One of the most fun parts of the Digital Anthropology MSc is the practical project. We’re tasked with conducting a short ethnographic project to be presented online where you are encouraged to be experimental and self-reflexive. Unlike an essay, it doesn’t carry the weight of convention and I felt like I could just have a go and see what happened. Not everyone on the course enjoyed the open-ended brief, however, especially as there are still so few genuine digitally presented anthropology projects out there to reference. There should be more!
I chose the professional dominatrix market in London. Sex work like many other industries has been negatively impacted by the advent of online markets. Strip clubs and sex shops have been closing all over London with online retailers and video taking their place. However, the experiences provided by professional dominatrices is one area that has blossomed in the new ‘digital era’. Using Twitter, blogging, and websites to market their services many have found satisfying careers providing a service that can only really be experienced corporeally.
I initially chose this market because gift giving seemed central to the practise and gifts are such a classic in anthropology. However, it turned out that whilst gift giving has some performative value as a marketing tool it is actually quite rare. Dommes have long detailed lists of the gifts they require on their websites, however, they actually don’t receive them anywhere near as often as they’d like!
The focus of my project was the digital tools used by both those selling and those buying the services. However, in a market that is hidden and secretive and has strong psychological and relational aspects, even asking a straightforward question like ‘what are you buying’ was one I had to lead up to with my (very generous) informants. It’s important with a subject area as delicate as this one to mention that I worked within the anthropology departmental ethics framework and received informed consent from all the participants. This included an agreement to change any sections they felt might misrepresent them or might compromise their privacy, luckily they were all happy with the project and I didn’t have to make any changes.

Once I felt like I had a feel for how the market worked I chose to build a fictional dominatrix site, set up a twitter account and a ‘secret’ email account. I chose a WordPress blog because that’s what most of the dommes seemed to use and went with the kind of colour schemes and tone they use too. I had to take images from google image search in order to maintain the privacy of my informants.
The email account is set up as a series of emails between a fictional domme, a sub, me and me the anthropologist that you can access if I give you the login details. This is where the bulk of my findings can be found.